"Great book, very interesting. I really enjoyed how the author was able to intertwine his novel with historical facts! The research behind this book looks huge and very deep. Well done!"

THE DEW OF HEAVEN 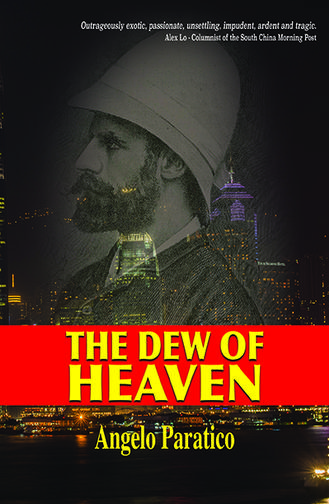 "This book brings you back to the real pleasure of reading and being transported into a wonderful story with historical background and exciting fiction. Switch off your phone, seat comfortably and enjoy an exotic and magical moment for yourself with the Dew of Heaven."

An historical novel based on true events set in Hong Kong and Macau. The story unfolds with the sudden reappearance of a mysterious Holy Grail charged with an irresistible magic power.

In Mongolia during the '20's, Stalin's henchmen razed lamaseries, burned libraries, and shot thousands of harmless lamas, smashing their precious artworks and sacred relics. They were seeking Genghis Khan's spiritual banner - the Khara Sulde. A steel trident with silver rings carrying the black mane of his warhorse, a relic that disappeared from the Shankh lamasery of Ovorkhangai Aimag, in Western Mongolia.

The Japanese learned of Stalin's failure to find the relic and unsuccessfully searched during their botched attempt to invade Mongolia prior to WWII.

Adolf Hitler consulted Swedish explorer, Sven Hedin, in an effort to locate it. Despite Hitler's success locating other ancient relics - such as Longinus' spear that pierced the heart of Jesus - he was unable to locate the Khara Sulde.

Why then, has the Khara Sulde surprisingly resurfaced today in contemporary Hong Kong, and right into the hands of a strange Italian mogul?